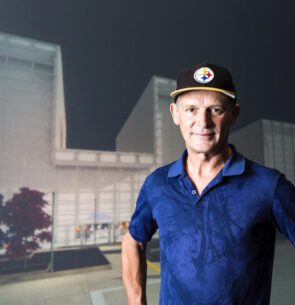 Internationally renowned choreographer Gilles Jobin has created some twenty dance pieces since 1995 which have earned him critical as well as public acclaim. In 2015 he received the 2015 Swiss Grand Award for Dance by the Federal Office of Culture from Federal Councillor Alain Berset.

Fascinated with new image technologies, Jobin made a 3D film in 2016, WOMB. One year later, he created VR_I a dance piece in immersive virtual reality which was awarded a prize at the Festival du Nouveau Cinema in Montreal. The work has featured in more than 40 venues around the world, including the Sundance Film Festival, the Venice International Film Festival and the Dance Biennale in Lyon. Two augmented reality projects followed in 2019, Magic Window and Dance Trail in 2020. That same year his team creates a digital model of a real theatre under construction in Geneva, La Comédie de Genève. Gilles Jobin and his team offered La Comédie Virtuelle, a multi-user VR experience that would enable the public to visit a bustling new Eaux-Vives building,  the piece was presented in competition at the 77th Venice International Film Festival 2020.

Cie Gilles Jobin presented during the festival  a daily live show in real time, La Comédie Virtuelle – Live show, with 5 dancers from Switzerland, India, Australia. In 2021, he created Cosmogony, a mapping / video installation using motion capture in real time, in which virtual dancers appear locally being remotely motion captured from the studio in Geneva to the venue. With his VR and AR projects, Jobin addresses the issue of content creation for these new technologies from the viewpoint of performing arts.