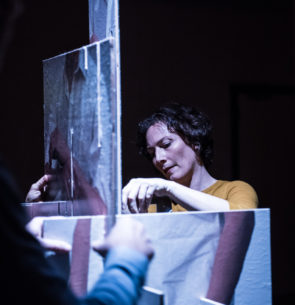 Course Director of the MA in Contemporary Dance at the Irish World Academy, University of Limerick

Dr Jenny Roche has worked as a contemporary dancer since the early 1990s performing with a wide range of choreographers in Ireland and internationally, including Michael Keegan-Dolan, Rosemary Butcher, Jodi Melnick, John Jasperse, Yoshiko Chuma and in work by Dominique Bagouet, restaged by Les Carnets Bagouet (France). She has danced for Daghdha Dance Company, Dance Theatre of Ireland, Irish Modern Dance Theatre, Cois Céim and was a founder member of Fabulous Beast Dance Theatre.

She co-founded Rex Levitates Dance Company (now Liz Roche Company) with her sister, choreographer Liz Roche in 1999 and has performed extensively with the company, most notably in the Meet in Beijing Festival, China and the Baryshnikov Arts Centre, NYC. In 2010 she received her doctoral award from Roehampton University, London. From 2007 to 2011, she was Dance Adviser to the Arts Council of Ireland/An Chomhairle Ealaíon and she was Senior Lecturer in Contemporary Dance at Queensland University of Technology, Brisbane from 2013 to 2017.

Jenny continues to work as a performer and creative collaborator, most recently with Liz Roche Company and Jodi Melnick on Alternately Terrific and Gentle, and with Carol Brown on a dance film/installation presented in the Pah Homestead Gallery, New Zealand in 2017, Lightmoves Festival of Screendance, Limerick in 2018 and Ars Electronica, Austria in 2020.

In November 2019, she collaborated with Ruth Gibson, Bruno Martelli and Mel Mercier on the installation and live performance, Expanded Fields  for Limerick City Gallery of Art. She is co-principal investigator with Ruth Gibson on The Experience Together Network, which is experimenting with ways of capturing and disseminating experiences of “liveness” in dance across digital platforms, co-funded by the AHRC and the IRC. Her book, Multiplicity, Embodiment and the Contemporary Dancer: Moving Identities was published in 2015.

Overview of Modes of Capture 2019 – 2021 including traces from some of the materials, talks and workshops experienced over the three symposiums. *Please wear comfortable clothes that you can move in.   Tickets – €10 for the full day Location – Dance House, Dublin BOOK –  https://dublindancefestival.ticketsolve.com/shows/873632447/events/129411531

Workshop led by Jenny Roche and Liz Roche sharing some of the research outcomes and practices accumulated over the ongoing Intraspaces residency at the Irish World Academy. This will include movement tasks, autoethnographic writing, micro – phenomenology and movement exploration. *Please wear comfortable clothes that you can move in.   Tickets – €10 for the […]