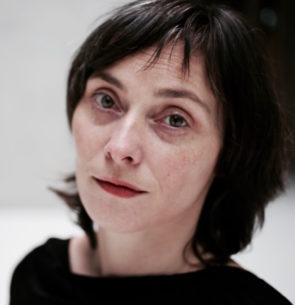 Liz is co-founder and Artistic Director of Liz Roche Company. The company has produced and toured over 20 of her works, performing throughout Ireland and internationally at prestigious venues and festivals including the Baryshnikov Arts Centre and Judson Church New York, South Bank Centre London, Edinburgh Fringe Festival, Meet in Beijing Festival and Powerhouse Brisbane.
Between 2009 and 2012 Liz was choreographer-in-residence at the Irish World Academy of Music and Dance at University Limerick, and is a former recipient of Peter Darrell Choreographic Award, Bonnie Bird U.K. New Choreography Award and the Dublin Fringe Festival’s Jane Snow Award.

Liz’s 2015 work Bastard Amber was presented by Dublin Dance Festival and The Abbey Theatre. This was the first time in the history of the state that an Irish choreographer has been commissioned to make a full length work for the main stage of the Abbey Theatre.
She has also been commissioned to make work for a number of dance companies, festivals and venues including the National Ballet of China, Scottish Dance Theatre, Cork Opera House, Sirius Arts Centre, Goethe-Institut Ireland, Kilkenny Arts Festival, The National Gallery of Ireland, Arcane Collective, Maiden Voyage Dance, Croi Glan Integrated Dance, Cois Ceim and Dance Theatre of Ireland.

Liz Roche will be in conversation with UK choreographer Siobhan Davies who will be discussing her creative investigation spanning the last five years, relating to process, legacy and transmission between dancing bodies.

Morning Sessions: Dancer Knowledge: how this bring us into relationship with the world and each other.