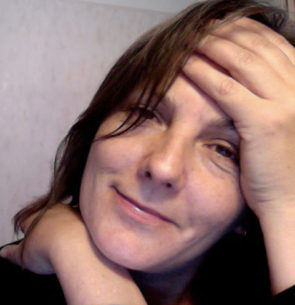 Rebecca Hilton (1964-) is an Australian born artist living in Stockholm. Her practices include dancing, performing, choreographing, teaching, writing and talking. Over three and a half decades she has contributed to the work of a range of artists including Russell Dumas, Stephen Petronio, Mathew Barney, Michael Clark, Tere O’Connor, Jennifer Monson, John Jasperse, Lucy Guerin, Tino Sehgal, Xavier Le Roy, Scarlet Yu, Chrysa Parkinson, among others.

Rebecca is a Professor of Choreography for the research area SITE EVENT ENCOUNTER at the Stockholm University of the Arts.

Keynote: Rebecca Hilton | I MISS OUTSIDE

John Jasperse, Rebecca Hilton and Jodi Melnick discuss their collaboration in 2007, which resulted in the work Becky, Jodi and John as a lens to explore ideas of transmission, legacy and networks of exchange in dance over ten years on and with a sense of how things have shifted in between times. As we face a less […]

Courtesy of John Jasperse Projects/Thin Man Dance, Inc Becky, Jodi and John is an evening-length work for three dancers, choreographed by John Jasperse. The project addresses the longevity of the performer. Dance, unlike most of the performing arts, places a strong emphasis on youth and has little work for seasoned performers once they enter into […]